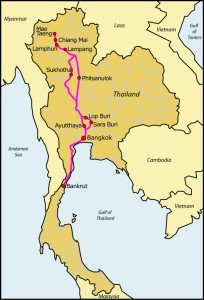 Thailand, officially the Kingdom of Thailand, formerly known as Siam, is a country at the centre of the Indochina peninsula in Southeast Asia. It is bordered by Burma, Laos, Cambodia and Malaysia. Thailand is a monarchy headed by King Bhumibol Adulyadej, Rama IX and governed by a military junta that took power in May 2014. The king is the ninth of the House of Chakri, and has reigned since 1946 as the world’s longest-serving current head of state and the country’s longest-reigning monarch. Although a constitutional system was established in 1932, the monarchy and military have continued to intervene periodically in politics.

With a total area of approximately 513,000 km2 (198,000 sq mi), Thailand has around 66 million people. The capital and largest city is Bangkok, which is Thailand’s political, commercial, industrial, and cultural hub. The country’s official language is Thai and the primary religion is Buddhism, which is practised by around 95% of the population.