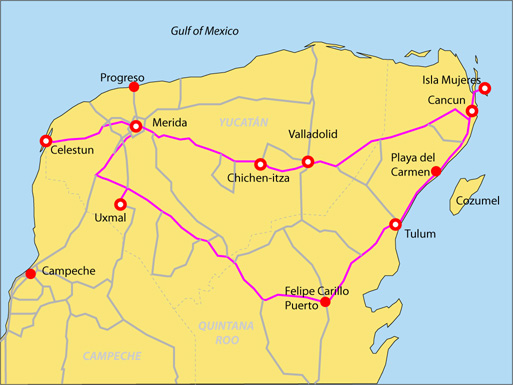 The Yucatán Peninsula, in southeastern Mexico, separates the Caribbean Sea from the Gulf of Mexico, with the northern coastline on the Yucatán Channel. The peninsula comprises the Mexican states of Yucatán, Campeche, and Quintana Roo; the northern part of the nation of Belize; and Guatemala’s northern El Petén Department. There are many Maya archaeological sites throughout the peninsula; some of the better-known are Chichen Itza, Tulum and Uxmal. Indigenous Maya and Mestizos of partial Maya descent make up a sizable portion of the region’s population, and Mayan languages are widely spoken there. Since the 1970s, the Yucatán Peninsula has oriented its economy towards tourism, especially in the Mexican state of Quintana Roo. Once a small fishing village, Cancún in the northeast of the peninsula has grown into a thriving city. The Riviera Maya, which stretches along the east coast of the peninsula between Cancún and Tulum, houses nowadays over 50,000 beds.